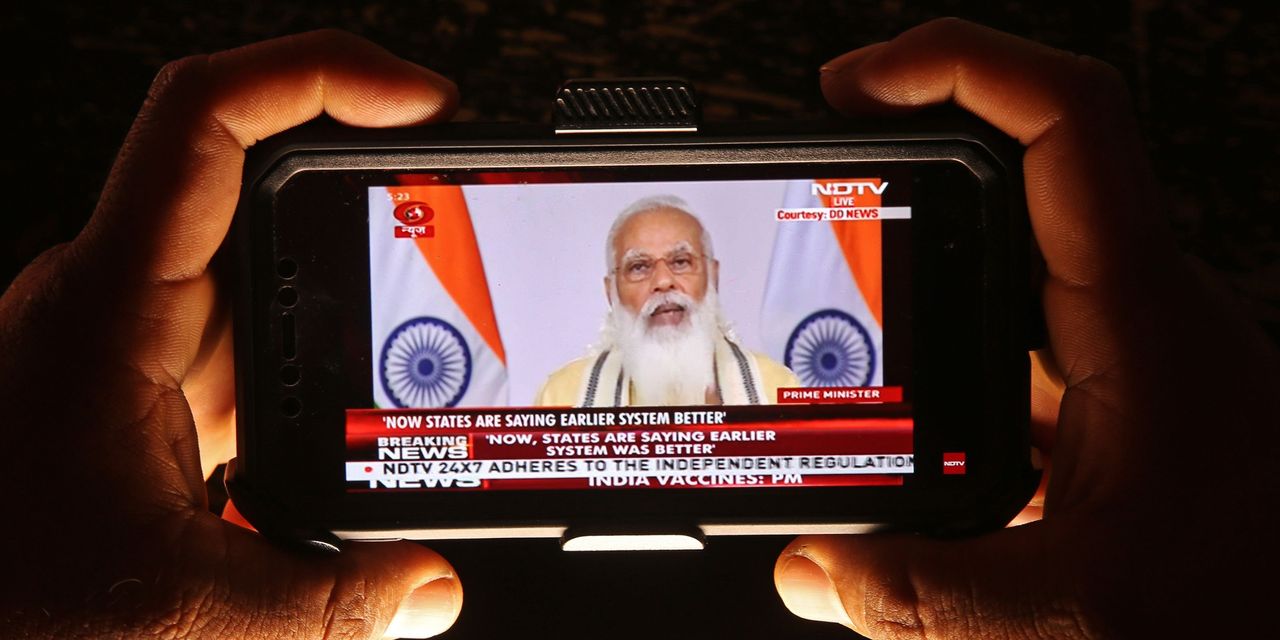 Indians have a lot to argue over, but there’s one thing they seem to agree on these days: Twitter has an India problem.

Supporters of Prime Minister Narendra Modi attack the California-based company for flagging dubious claims by ruling Bharatiya Janata Party officials. They also don’t like that Twitter moderators seem to drag their feet when New Delhi demands that the company censor tweets and block accounts. BJP critics castigate the platform for doing too little to defend their free speech or combat Hindu nationalist disinformation. Economic nationalists want to start a homegrown rival as part of a larger goal to dilute the power of U.S. tech firms. Their implicit role model is China.

It’s fair to worry about Twitter’s outsize ability to shape political outcomes, and the company has itself to blame for stoking fears with heavy-handed actions—including the decision to ban Donald Trump. Indians aren’t the only ones worried. Last week the Nigerian government suspended Twitter indefinitely after its moderators deleted a tweet by the country’s president for violating Twitter’s abusive-behavior policy.

Nonetheless, the Modi government appears to be playing a game of chicken with the Silicon Valley giant that the country cannot afford to win. Should New Delhi ban Twitter—or effectively do so by inducing it to exit with unreasonable demands—India will be the ultimate loser. In global perceptions, this would place India in the dubious company of Iran, China and North Korea. Ordinary Indians, including those urging the government to get tough with the company, would be robbed of a valuable window on the world. Indian dissidents, cartoonists, writers and journalists would lose one of the few spaces left where they can express themselves freely.

The current standoff comes against the backdrop of Mr. Modi’s bungled response to the pandemic—and his roasting on Twitter over it. According to official records, as of Wednesday about 360,000 Indians had died of Covid-19. Experts say the true count is likely much higher. Faced with oxygen shortages in hospitals, long lines at crematoria and grisly images of bloated bodies floating in the Ganges, many Indians have taken to Twitter to vent their anger. Opposition politicians and critics of the BJP have joined them. Public outrage has forced even usually obsequious TV news channels to question the government.

In response to being pilloried online, last month a BJP spokesman shared a document on the platform that suggested a coordinated campaign by the opposition Congress Party to malign the government. After a fact-checking site pointed out that parts of the document appeared doctored, Twitter labeled the tweet “manipulated media.”

The Modi government demanded, unsuccessfully, that the company drop the tag and sent police to the company’s Delhi office to serve it a notice of investigation. The government has also publicly warned Twitter that it must comply with tough new rules put in place in February that require platforms with over five million users in India to appoint an Indian citizen in a senior compliance role, accede to government requests for user information and remove posts within 36 hours of receiving a government order. During protests by Indian farmers earlier this year, Twitter balked at government demands to take down tweets by journalists and opposition politicians. But the company said Wednesday that it is making every effort to comply with the new regulations. With 17.5 million Indian users, the country represents Twitter’s third-largest user base, after the U.S. and Japan.

Twitter isn’t the only U.S. tech company having difficulty navigating the twin currents of protectionism and hard-line Hindu nationalism that have characterized Mr. Modi’s second term in office, which began two years ago. WhatsApp has gone to court to fight New Delhi’s demands that it break chats’ encryption to trace where information originates. A BJP leader lodged a police complaint against Netflix for a scene in the miniseries “A Suitable Boy” depicting a Hindu girl kissing a Muslim boy. An Amazon executive endured hours of police questioning over the way in which the Indian show “Tandav” depicts Hindu deities.

Still, it could be worse for these firms. Amid border clashes with China last year, India abruptly banned scores of Chinese apps, including TikTok and WeChat.

Some of Twitter’s problems are of its own making. The ban on Mr. Trump has raised legitimate fears around the world that the company seeks to target politicians who may not share the political sensibilities of San Francisco progressives. Indians ask: If they can do this to a sitting U.S. president—albeit one on his way out—is anyone safe? On a 2018 visit to India, Twitter CEO Jack Dorsey held a placard that said “Smash Brahminical Patriarchy.” Some on the Hindu right view this as proof that the platform is gunning for the BJP.

Yet no Indian politician has benefited more from Twitter than Mr. Modi, who used the platform to transform himself from the chief minister of a medium-sized state to the most powerful national leader in a generation. His party dwarfs its rivals on social media. The company may be clumsy, but it isn’t malign. Likening it to the British East India Co., which spearheaded India’s colonization in the 18th century—a favorite rhetorical trope of Indian nationalists—is absurd.

The Modi government has “a fundamental impulse” to “control the information order as much as possible,” according to the political scientist Pratap Bhanu Mehta. In that climate, Twitter’s attempts to safeguard free speech, however haphazard, further open discourse and political accountability. The postulates of California “wokeism” have little value, but that effort to protect speech is worth defending.